If you’re looking for the best cat litter, you may be overwhelmed by all the choices out there.

I’m here to help you sort that out. I’ll talk about the pros and cons of each type of litter, and why you might want to choose them. After that, I’ll take a close look at six of the most popular cat litters on the market.

What To Look For When Buying Cat Litter

What all of these things have in common is that they’re absorbent, and easy for your cat to bury its business in. It allows your cat to go to the bathroom in a litter box, instead of needing to go outside.

By absorbing urine and covering feces, it also keeps your house from smelling — as long as you clean the litter box regularly.

Technically, any absorbent substance can be used as cat litter. Sand, shredded newspaper and even wood shavings have been used in the past. Nowadays, kitty litter is usually made from clay, silica or recycled paper.

Unless your cat lives strictly outdoors, like a barn cat, you’re going to need kitty litter. Without it, both you and your cat will be miserable, and your house will quickly start to smell like cat pee. Needless to say, this isn’t an option.

Most cat litters have extra features. Some are scented, to cover up odors. Others absorb odors, rather than cover them up. Some will clump around your cat’s waste, while other litters are made to stay loose for easy sifting.

Are You Allergic to Dust?

A lot of regular litters contain lots of fine dust. Not only is this bad for your allergies, but it can be bad for your cat as well. When your cat uses its box, it likes to cover up its business.

This involves a lot of kicking and scratching, which churns up the dust and makes it go airborne. Your poor cat will inhale some of this, which isn’t good for their little lungs.

If you’re allergic to dust, you might want to consider a dust-free cat litter. Even if you aren’t, a dust-free litter is better for your cat.

Even if you’re using a dust-free litter, there’s going to be some mess. Inevitably, your cat will sweep some out of the box, and it will get scattered across the floor. If you don’t sweep frequently, you’ll end up tracking litter around the house, which is messy and gross.

A good way to avoid this is to use a cat litter mat.

Clumping litters can at least make this more sanitary, because anything wet will cluster together instead of scattering. Enclosed boxes are the best solution, though.

They surround your cat’s box on three sides, so you’ll only have to deal with litter that’s been tracked out of the entrance.

LIke with any product, your budget will affect what kind of cat litter you get. So before you make a choice, you’ll need to decide on a budget.

A standard, 20-pound box of kitty litter will last about twelve to sixteen weeks for a single cat. If you have two cats, it will last about six to eight weeks. Larger cats will also need more litter, so keep that in mind if you have a Maine Coon or other large breed.

Now that you know how often you need to buy more litter, you’re ready to make a price comparison.

Do You Care About The Environment?

If you’re concerned about your cat’s environmental impact, you’ll want to take a good look at what type of litter you’re using.

I’ve already talked about silica dust, which can irritate cat and human lungs alike. Many scented litters can have the same effect, particularly for people and cats with respiratory issues.

Another concern is the sodium bentonite that’s used in clumping litters. This mineral is obtained by strip-mining, which is terrible for the environment.

If you’re looking for an environmentally-friendly cat litter, consider a non-clumping litter, or one that’s made from recycled paper.

Does Your Cat Hate Its Litter Box?

If your cat refuses to use its litter box, you’ll need to figure out why. Common reasons include:

Cat litter isn’t a one-size-fits-all product. There are many varieties available, and they all have good and bad features. As you read this list, you’ll want to think about your lifestyle.

Do you live in a small apartment? You’ll probably want an odor control cat litter.

Do you live on a farm? You’ll find that eco-friendly cat litters are easy to compost.

There are other options, too. Let’s take a look at them all.

Most cat litters these days have some kind of odor control. These litters may or may not be scented, but they smell better than sand, sawdust or wood shavings.

In general, any standard clay litter reduces odor by at least a little bit. This is because it absorbs urine, rather than having it pool at the bottom of the bin.

Scented cat litters take odor control to the next level. They include a perfume that covers up the smell of your cat’s business. On the plus side, this is by far the best way to get rid of cat odors. Even the area right around the litter box will smell nice, as long as you clean it regularly.

On the other hand, the perfumes in scented litter can irritate your lungs, as well as your cat’s.

Unscented cat litter is — surprise! — any litter that isn’t scented. Usually, this is a basic clay litter, but it can also be a paper or silica litter.

The costs and benefits are the opposite of scented litter: It’s great for people with respiratory issues, but it doesn’t do as good of a job covering up your cat’s smell.

Clumping cat litter is designed to cluster around urine and feces. This makes it very easy to clean your cat’s box, since you just have to dig out the clumps with a cat litter scoop.

Clumping litter also lasts longer, because you’ll only need to dump out the whole box every few weeks.

On the other hand, clumping litter is terrible for the environment. I’ve already talked about this, but it bears repeating. It’s also more expensive than non-clumping litter.

Non-clumping litter absorbs urine, and lets your cat bury its feces. This is the bare minimum for any decent litter, but you’ll be able to buy this kind of litter more cheaply than clumping litters.

It’s also better for the environment, because it doesn’t contain sodium bentonite.

The downside? You’ll need to empty out the whole box frequently, since you can’t remove urine clumps. These litters smell more, since you’re leaving urine in the box from day to day.

There are a few types of eco-friendly cat litter, depending on exactly how eco-friendly you want to be. The only type that is never eco-friendly is clumping litter, which I’ve already beaten to death.

Regular clay litter is all-natural, and doesn’t harm the environment when it’s thrown out. On the other hand, it contains silica dust, which can be irritating.

The most eco-friendly litter is made from recycled paper. It smells more than most litters, but it’s completely biodegradable.

Crystal cat litter is made from silica gel, the same material that’s in those “do not eat” packets that ship with moisture-sensitive products. It’s extremely absorbent, and doesn’t produce any silica dust.

This litter doesn’t clump like clumping litter, and you’ll need to shake or stir the litter daily, to keep urine from pooling. Another downside? It can be toxic if it’s ingested in large amounts. I don’t think it’s a major concern: I’ve never seen a cat eating litter.

So What’s The Best Type of Cat Litter?

As I said, no single litter is best for everybody. To make the right decision, you’ll have to decide what’s best for you and your cat.

Here are a few things to consider:

Below are the top picks for the best cat litter for your home. 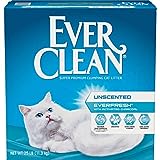 This is a clay cat litter, manufactured by Ever Clean. It comes in a 42-pound bag, and is inexpensive for the amount you get. It contains ammonia-blocking chemicals, which lock odors in for up to ten days.

On the other hand, it’s a clumping litter, which means it’s damaging to the environment. It’s also heavy, so you’ll want to look elsewhere if you can’t lift heavy objects. 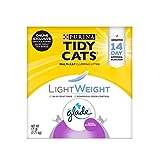 This is another unscented, clumping kitty litter. Like the Ever Clean litter, it has ammonia blockers to absorb the smell of urine. It also doesn’t produce much dust, which is great if you have respiratory issues.

On the other hand, it’s relatively expensive for a 17-pound pail. Like most of the litters on our list, it’s also a clumping litter. This is easy to clean, but bad for mother nature. 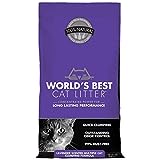 This is a clumping, clay cat litter that’s perfumed to cover up odors. It’s specifically made for people with multiple cats, and produces very little dust compared to most clay litters. You’ll also have an easier time cleaning it than non-clumping litters.

Unfortunately, it’s pricey for the weight — only 14 pounds — and isn’t eco-friendly. 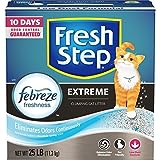 This is another clumping clay litter. It’s manufactured by Fresh Step, and comes in a 25-pound box. It’s very inexpensive, and has ammonia blocking chemicals to reduce the smell of urine.

On the other hand, it produces a lot of dust. It also contains sodium bentonite, which is bad for the environment. 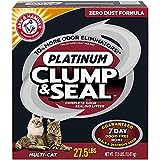 This clumping litter is made by Arm & Hammer. Since they’re experts on killing odors, it should come as no surprise that this litter absorbs odors. It locks them in for up to seven days. It’s very reasonably priced for a 28-pound box.

This litter makes very tight clumps, which can be heavy and hard to clean out. Like all the other clumping litters on our list, it’s also not eco-friendly. 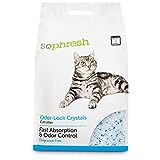 If you’re an environmentally-minded person, you’ll probably love So Phresh’s crystal cat litter. It’s made from silica gel, and is extremely absorbent. You can go up to a month without changing this litter.

What’s the downside? The 15-pound bag is expensive. You’ll also need to shake or stir the box daily to make sure all your cat’s urine is absorbed.